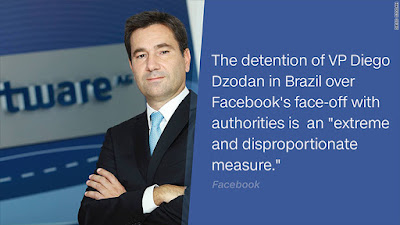 Brazilian Judge ordered the police to release the VP Facebook Brazilian Diego Dzodan, a day after his arrest. Dzodan himself arrested in connection with the dispute concerning the application Whatsapp.

Judge of Sergipe, Ruy Pinheiro, issued an order for the release Dzodan. In a statement, the judge said, Dzodan can not be arrested for not a party being investigated in the case. Action Dzodan detention as “illegal coercion”.

“Detention Diego very extreme and inappropriate policy. We are excited at the Sergipe judge issued a warrant for his release,” said Facebook.

The authorities in Sergipe says, they need help Facebook in a case where the alleged use Facebook Messenger and WhatsApp application to plan their crimes.

According to the police, the judge had issued the order three times. In fact, Facebook started to be fined around US $ 12,600 per day two months ago. Meanwhile, last month, fines are set to rise to US $ 253,000 per day.