After long months of rumors, Samsung finally makes its Galaxy S20 official. As their names don’t necessarily indicate, these smartphones are the successors to the excellent Galaxy S10 that the Korean brand launched at the same time last year. 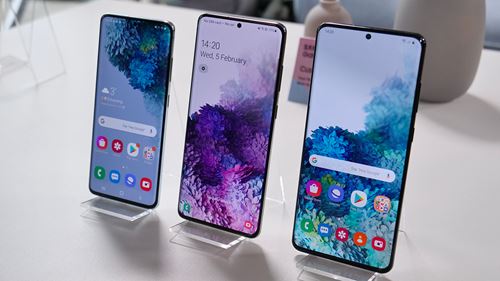 To make the reading of this article more pleasant, we have decided to split it into two parts. Let’s start with the Galaxy S20 Ultra, the most ambitious smartphone ever released by Samsung.

It must be said that physically alone, the Galaxy S20 Ultra 5G is a monster.

This mobile is simply gigantic, which still raises questions about its practicality in everyday life.

Its 220 grams are particularly noticeable in the hand and it will take much more than one or two hours of handling to find out if it’s really disturbing.

While it weighs less than an iPhone 11 Pro Max (226 grams), the 8.8 mm thick mobile phone makes it more complicated to use than its Californian rival (8.1 mm).

Indeed, its Dynamic AMOLED screen has a diagonal of 6.9 inches, which is simply gigantic! The Korean brand nevertheless had a good idea to adopt the 20:9 format, which extends it in length rather than width.

In fact, the Galaxy S20 Ultra is narrower than the Galaxy Note 10+, which has a smaller 6.8-inch screen.

The main novelty of this new generation is the arrival of a 120 Hz refresh rate display, which is twice as high as what can be seen on most consumer smartphones (there are a few exceptions such as the OnePlus 7T and Realme X2 Pro which offer 90 Hz).

Thanks to this new feature (which is not enabled by default to preserve the autonomy of the mobile), the smartphone displays twice as many images per second, which improves the fluidity of its interface.


Another smaller change, the punch that integrates the front camera of the Galaxy S20 Ultra 5G is now centered at the top of the screen, as on the Galaxy Note 10. In the 2019 S10s, it used to be hidden in the right-hand corner.

Finally, it’s not a novelty but rather a step backward, Samsung is abandoning curved screens. If officially, the brand assures you that “no, not at all, look carefully, it’s still a little rounded”, we assure you that the curved edges have indeed disappeared.

Critics of this technology can finally buy a Samsung smartphone with peace of mind. Others can still check out the Chinese brands. 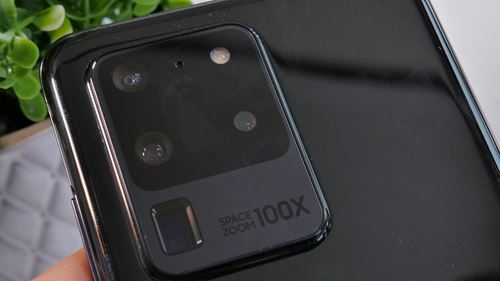 On the back of the Galaxy S20 Ultra 5G, you’d have to be blind not to notice the smartphone’s photo block.

As big as it is thick, it houses four hotplate-style cameras as well as an LED flash. Let’s face it, it’s certainly one of the most hideous designs we’ve seen to date.

According to Samsung, the camera is the number one reason people switch smartphones. That’s why the Korean decided to offer the maximum with his S20 Ultra, starting with an incredible 108 Mpix main sensor.

Indeed, it uses a new process called “nona-binning” or “nona-cell” which, in opposition to the classic “pixel-binning”, consists of a fusion of 9 pixels in 1 rather than 4 pixels in 1.

We thus obtain 12 Mpix shots of excellent quality on which it is possible to zoom in without too much loss of detail, much more than on a classic smartphone.

Another advantage is that the very large size of the sensor (1/1.33 inch) allows it to capture more light, which we hope will allow us to break records in night photography. We’re really looking forward to trying it out! 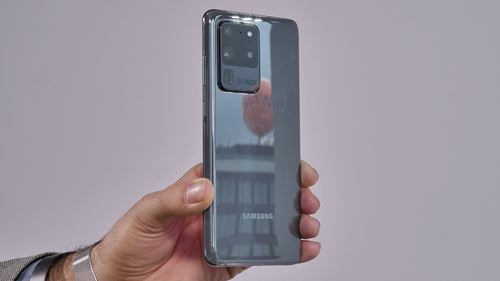 On the other hand, note that Samsung is abandoning the variable aperture system introduced with the Galaxy S9. The main photo module of the Galaxy S20 Ultra 5G offers only one aperture, f/1.8.

The second exceptional camera of the Galaxy S20 Ultra is intended to compete with the Huawei P30 Pro.

As the Chinese brand, Samsung uses a periscopic zoom to see much further than its traditional telephoto x2 lens.

The brand communicates on a zoom x10 without loss of quality but explained to us that it was, in fact, an optical zoom x4 attached to a 48 Mpix sensor (module opening at f/3.5), which allows it to make a digital enlargement a posteriori.

It is even possible to access a 30x or 100x digital “superzoom” which, let’s face it, bluffed us during our first tests. Here again, we will need more time to measure their real efficiency.


In fact, the interface of the Samsung Camera application is a record-breakingly simple one. By touching the zoom button, you can easily go to x2, x3, x10, x30 or x100 without having to use a wheel, which is much less ergonomic.

The other two modules of the Galaxy S20 Ultra 5G are an ultra-wide-angle sensor attached to a 12 Mpix (f/2.2) sensor and a ToF sensor.


Note that Samsung’s night mode now captures 30 images simultaneously instead of 9, allowing it to improve its algorithmic processing.

The Single Take mode, located on the far left of the Camera application, allows you to take several pictures simultaneously with all the sensors at the same time and groups them all in the same place, allowing you to make a choice later. It also takes small videos and automatically adds music. 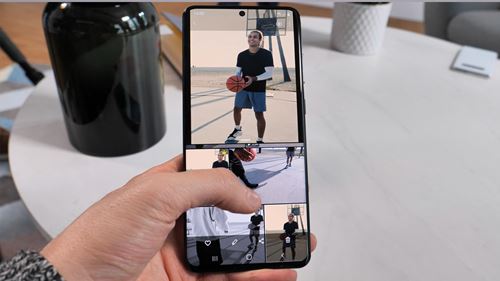 The smartphone is capable of filming in this definition at 24 frames per second, which is a first for the industry. In fact, the brand had a good idea to add a “photo” button to 8K videos in order to create a 33 Mpix shot from a still image.

Know that the smartphone embeds the new Samsung Exynos 990 processor in Europe (Americans are entitled to the Snapdragon 865) coupled with 12 or 16 GB of RAM and 128 or 512 GB of storage (expandable by Micro SD up to 1 TB).

The S20 Ultra also comes with a very high capacity battery (5000 mAh), compatible with wired recharging up to 45W (a 25W charger is included in the box).


It is also the first Samsung smartphone to be marketed only in the 5G version.

Note also the disappearance of the jack plug which seems to be coming to an end this year. Finally, Samsung is adopting the eSIM in addition to its usual Nano-SIM double drawer. 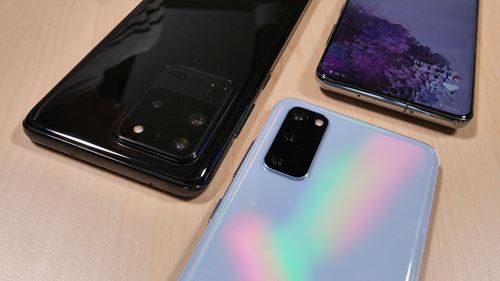 They use the same processor, also abandon the jack plug, support 25W fast charge, are available in 128, and 512GB versions (expandable by Micro SD) and have the main attraction of their 120Hz display, also uncurved.

The Galaxy S20 and S20+, on the other hand, do not all support the 5G. It will cost an additional 100 euros to purchase a model compatible with the new network standard (RAM will increase from 8 to 12 GB).

The main point of difference between the classic S20 and the S20 Ultra is, of course, the camera.

Less prominent, the camera module of the S20 and S20+ is also less well equipped.

In any case, both mobiles offer the same camera device, with the exception of a ToF sensor present only on the S20+.

Thus, there is a 12 Mpix main sensor on the back of these devices, as on the Galaxy S10.

The wide-angle lens is now on f/1.8 which, compared to the f/1.5 of the S10 in low light, could be penalized at night. Samsung assures us that they have found a way to compensate algorithmically.


The second camera of the smartphone is an ultra-wide-angle lens opening at f/2.2, attached to a 12 Mpix sensor.

Samsung has decided to replace the telephoto lens with x2 zoom present for several generations by a 64 Mpix sensor (f/3.5 opening module).

With the latter, the brand claims to be able to take photos with a “zoom x3 without loss of quality”.

The problem is that it is impossible for us to give you at the moment the precise operation of this camera, Samsung’s explanations being incomplete, to say the least.

Is it a real optical zoom or a vulgar digital resizing? We will try to clarify this point as soon as possible.

Finally, note that all the new features of the Galaxy S20 Ultra are also present on the S20 and S20+. 8K recording, Single Take mode, night mode… Let’s also note the appearance of a night hyper-lapse mode to capture the movement of cars. 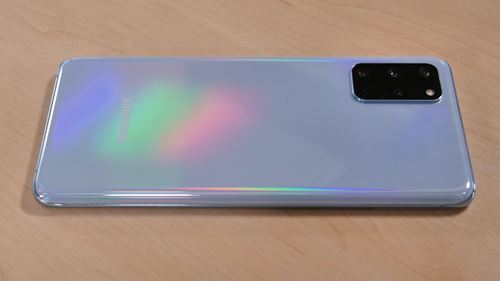 Samsung was expected to use Qualcomm’s new ultrasonic fingerprint sensor, but it turned out to be nothing of the sort.

The Galaxy S20, S20+, and S20 Ultra retain the same fingerprint sensor as the Galaxy S10 and S10+. That’s too bad, as other manufacturers won’t hesitate to steal Samsung’s thunder on this point later this year.

Google Duo integrated to One UI 2.1

It may be a detail but Samsung has also announced the native integration of Google Duo, Google’s video calling service, to the phone application of its smartphones.

This partnership of the web giant with one of the largest smartphone manufacturers could contribute to the development of this service.

On sale as of March 13 (well after the Galaxy Z Flip that gives them priority), the Galaxy S20, S20+, and S20 Ultra will be expensive.


Note that for any pre-order of an S20+ or S20 Ultra between February 11th and March 8th, Samsung will offer its new Galaxy Buds+ wireless headphones.