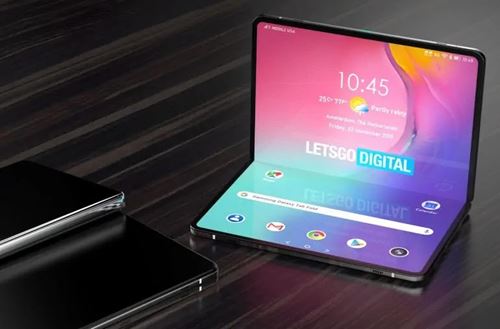 The South Korean brand, Samsung now has a large number of models to bring to market for foldable smartphones.

The Samsung GalaxyFold is now available and the brand will re-launch a new foldable phone in a few months.

The Galaxy Fold 2 has a totally different design, it’s a double-shell model with an elongated screen, similar to the recently introduced Motorola RAZR.

In addition to a new foldable smartphone, Samsung also seems to be working on a foldable tablet in the background.

Samsung Electronics filed a design patent with the International Design System in The Hague on May 9, 2019. The patent entitled ‘Mobile Phone’ was approved on 15 November 2019, and includes, in addition to a brief description, approximately 35 images.

These images show that there are at least three models that are at least different from each other. The folding line is not in the middle of all models.

The design differs from the current Fold, but also from the flap Fold under development. This new device can perhaps be described as a large folding phone.

You can fold the device horizontally. When open, creates a flexible screen that is wide and long enough.

A similar foldable Samsung phone was patented in August. This time, however, there is no front screen available, it is possible that Samsung chose it to reduce costs, so that the product can be marketed cheaper.

Because the front screen is missing, this design looks more like a tablet than a phone.

That’s why it was named “Galaxy Tab Fold“. Nevertheless, this device will undoubtedly be equipped with all the functions that a smartphone also has. It is not for nothing that Samsung called the patent a “mobile phone”.

In any case, it is striking that the front screen is missing. The absence of cameras is also striking.

No cameras are visible on this design. As this is a design patent and Samsung has integrated functions such as the speaker and USB connector, you can deduce that the camera function is not simply forgotten. 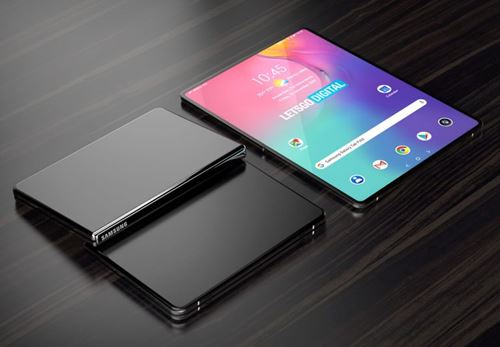 It remains to be seen whether this technology can be applied immediately in a foldable model. Obviously, this will be even more difficult to achieve.

Another new manufacturer, which will introduce a tablet smartphone next year, is China’s TCL.

The company has already presented a prototype device with two folding lines, allowing the phone to become a large 10-inch tablet. Samsung has already registered a similar Z-Fold design midway through this year.

Finally, the Fold is particularly appreciated for the functionality of its shelf. Several publishers have published a Galaxy Fold review, the general conclusion being: The Fold is a good tablet, but not a good phone.

A folding tablet may also be of interest to the enterprise market.

A target group that should certainly not be forgotten: it is finally easier for companies to spend €2,000 on such a product than a private person.