Skip to content
Apps News
December 29, 2022 Admin Apple, iPhone, WhatsApp
WhatsApp’s short messaging service is developing “Dark Mode” for applications on iOS (iPhone). This feature allows the application interface to turn dark. This information is distributed by WABetaInfo, the leakage portal for features that have not been officially released by WhatsApp. According to WABetaInfo, WhatsApp’s Dark Mode will later be released for applications on Android and iOS. 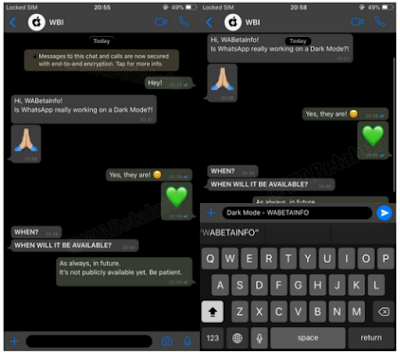 At this time the formula has just reached the Alpha stage, it hasn’t reached Beta. That is, it still needs a lot of process until these features can truly be enjoyed by all users. WABetaInfo shares screenshots of the Dark Mode interface on WhatsApp for iOS. It’s just that, not necessarily the final results will be the same, considering now it’s just the initial stage. Presumably the appearance for the Android version is also more or less similar. The basic nuance is black, then the accents are gray. The writing itself is made in contrast to the white choice.

Read also : Whatsapp Business coming soon in your iPhone, this is a minimum Requirement

Dark Mode is a popular feature. Some services have implemented it, say YouTube and the Chrome browser. The goal is that the eyes don’t get tired easily exposed to the screen with continuous bright light.

In addition, the dark interface can also save battery and provide more flexibility for users to choose. Let’s just wait until Dark Mode lands on the iOS version of iOS, or later gets to Android. There is still no information when the WhatsApp dark mode will stop at both platforms.

WatchOS 6 Gets Its Own App Store!