A year ago, everything was going well in Huawei. The Chinese brand was breaking record after record, enjoying an excellent surge in popularity and offer, with its P30 range, what the press around the world called “the best camera in a smartphone”.

There seemed to be no stopping Huawei, whose destiny was clearly heading for world number one status.

A year later, much has changed. Having been blacklisted by the United States in May 2019, Huawei can no longer offer Google services on its smartphones, making many applications incompatible with its new devices.

By a stroke of bad luck, a pandemic struck the world, preventing the brand from holding its major global reconquest conference originally planned for Paris.

Instead, its new smartphones, the Huawei P40, had to be presented during a live-stream, which is immediately less sexy. 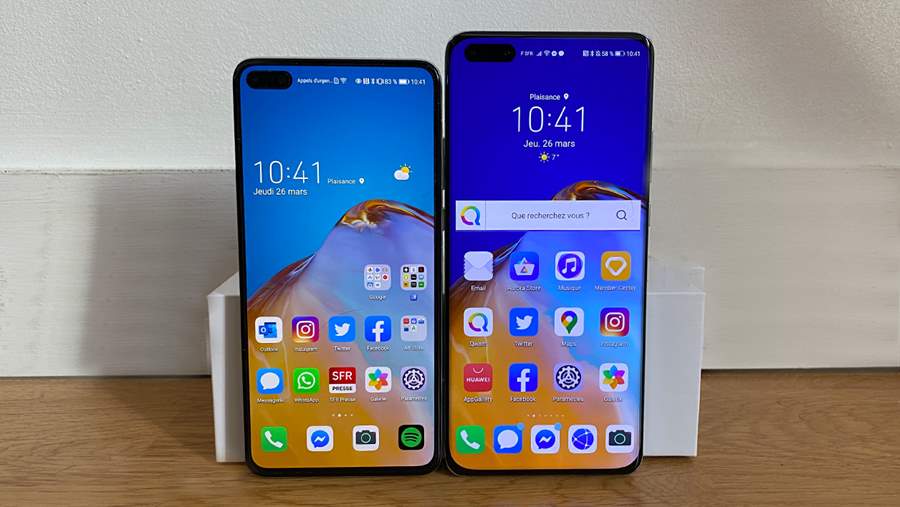 This year, Huawei is offering its P range in three models. In addition to the small P40 (with a 6.1-inch uncurved screen), there are the P40 Pro and P40 Pro+, two smartphones with a 6.58-inch OLED screen.

A special feature is that the OLED display is curved on all four sides of the smartphone, which is a first.

This gives the impression of only holding a screen in your hand, although, we’d rather warn you, it’s much less impressive in reality than in photos. Still, this new design is quite sublime.

Importantly, the screen curvature of the P40 Pro is less pronounced than on the Mate 30 Pro. The latter left no room for physical buttons, which is not the case here. The P40 Pro retains volume and power buttons.

Another new feature, which for the moment only concerns the P40 Pro and P40 Pro+, is that Huawei now offers a 90 Hz refresh rate on its mobile screens. We would have preferred 120 Hz, as on the Galaxy S20, but we’ll make do with that.

We notice from the very first minutes again in fluidity at the level of navigation, which is pleasant.

On the other hand, it’s hard to understand why the Chinese brand chose to insert such a wide punch in the upper left corner of its mobiles. The latter, which contains a front camera (32 Mpix) and a depth sensor, takes up far too much space. A single small camera would have done the trick.

Finally, it’s impossible to mention the design of the P40 without saluting the new colors invented by Huawei.

The color “frosted grey” on the back of our test products is particularly successful. Thanks to the matt glass coating, the back does not catch fingerprints.

The way the back reflects the light as if we were looking at a cloud, is also to be commended. In all objectivity, it is one of the most beautiful colors of recent years.

The camera module of smartphones, housed in a rectangle that creates a slight protrusion at the top left, is better integrated into the device than that of other smartphones (Samsung’s Galaxy S20 Ultra comes to mind).

The Huawei P40 Pro+ has a ceramic back. It is clearly intended for those who love more luxurious products.

The Huawei P40 belongs to the high-end smartphone category.

All three are 5G compatible and use Huawei’s powerful Kirin 990 processor in its new 5G version with even finer engraving (7 nm EUV). A boosted version of the Kirin 990 that was already found in the Mate 30 Pro. 8 GB of RAM is included.

Like the P30s, the P40s have a fingerprint sensor under the screen. The latter offers a 30% larger surface area and, according to Huawei, is also faster.

Our initial tests still find it sometimes inaccurate, even though there is nothing catastrophic about it. The P40s are also the brand’s first Wi-Fi 6-compatible smartphones, and Huawei is now moving into eSIM.

Like Apple, Google or Samsung, the Chinese company offers to set up a virtual package without going to its operator (although the latter must offer such a service). It is still possible to insert two Nano SIMs or a Nano-SIM and an NM card to extend storage.

This seems a little bit right for a high-end 5G smartphone, but the Chinese brand has already proven in the past its excellence in optimizing energy consumption. So let’s trust them.

Finally, the Huawei P40 Pro can handle the ultra-fast 40W charge, while the classic model only needs 22.5W. Only the Pro and Pro+ models are compatible with wireless charging, up to 27W. 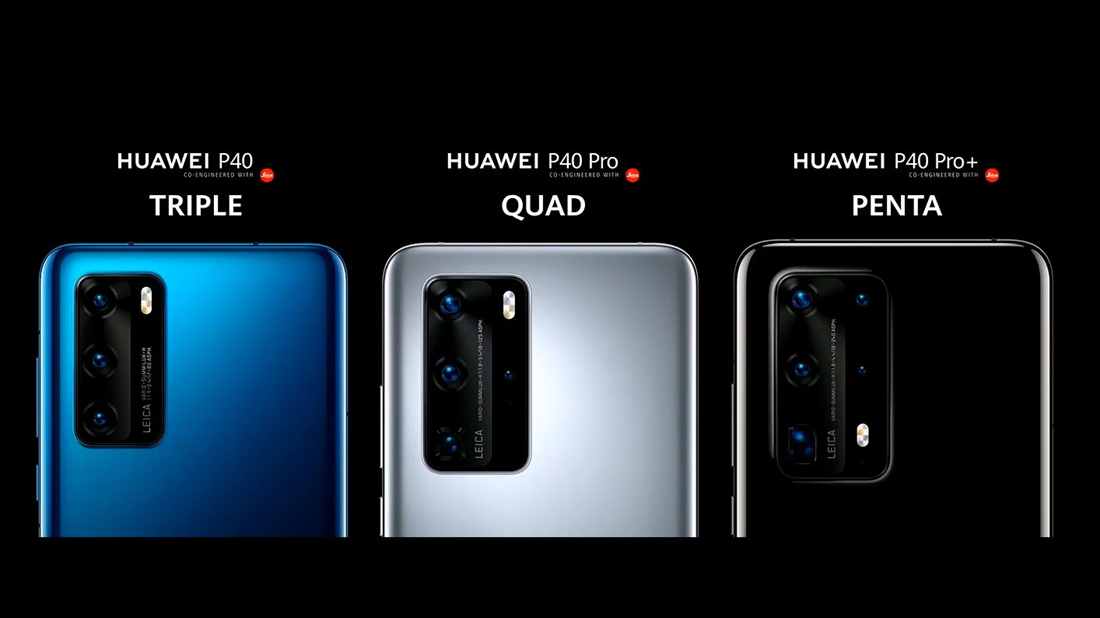 The Huawei P40, P40 Pro and P40 Pro+ do not have the same camera modules. To make it easier for you to read this article, here’s what each of these smartphones offers in terms of camera equipment.

Let’s start with the small Huawei P40. It’s a triple camera module that can be found on the back of the smartphone.

It uses SuperSpectrum technology, like the P30 Pro. This means that the color filters placed between the lens and the photosensor are RYYB (red, yellow, yellow, blue) and not RGB (red green blue).

This allows more light to enter the sensor, which improves the quality of night shots. The P40 also features a telephoto lens with a 3x zoom, an 80mm equivalent, which opens at f/2.4 (8MP sensor) and an ultra-wide-angle module that opens at f/2.2, attached to a 16MP sensor.

The Huawei P40 Pro improves on last year’s recipe. It is equipped with the same 50 Mpix sensor as the classic P40 but has three other modules.

Among them is the same ultra-wide-angle lens as the Mate 30 Pro, with a 40 Mpix sensor attached.

This extra-large (1/1.54-inch) sensor is also used for video recording functions and offers super slow motion at 7,680 frames per second.

We’ll have the opportunity to test its capabilities further in the near future. There is also a ToF radar dedicated to a depth of field measurement.

Of course, the Huawei P40 Pro also features an exceptional periscopic zoom, just like its predecessor.

The main difference from last year is that Huawei has decided to equip its super-telephoto lens with the same SuperSpectrum technology as its main sensor.

The promise: to allow you to take night shots from far away without any degradation in quality.

Our first tests are quite disappointing, there are big problems with white balance management (hopefully Huawei will fix them in a future software update).

On the other hand, let’s salute the smartphone’s foolproof optical stabilization. On one hand, even at 50x zoom, the image is not degraded by any shaking. Like Samsung with its Galaxy S20 Ultra, Huawei hits hard.

Finally, with its Penta camera module, the Huawei P40 Pro+ is the most impressive mobile phone ever announced by the brand.

The smartphone shares with the P40 Pro it’s 50 Mpix main sensors, 40 Mpix ultra-wide-angle and ToF sensor but differs in terms of zoom.

In fact, it has two. In addition to a telephoto lens with a 3x zoom (like the classic P40), this camera comes with the first periscope with… 10x optical zoom.

Attached to an 8 Mpix sensor (also SuperSpectrum), this one can go up to 100x digital.

The most mocking people will say that Samsung does the same with its S20 Ultra but let’s remind them that Korean’s mobile phone only has a 4x optical zoom. Chances are that Huawei’s phone is much better.

There are also a few new features common to all three smartphones, such as new algorithms for portrait mode (which improves skin color accuracy) and a glare removal system. A new mode similar to Apple’s Live Photo also allows you to record a short video before and after taking a picture to keep more memories. 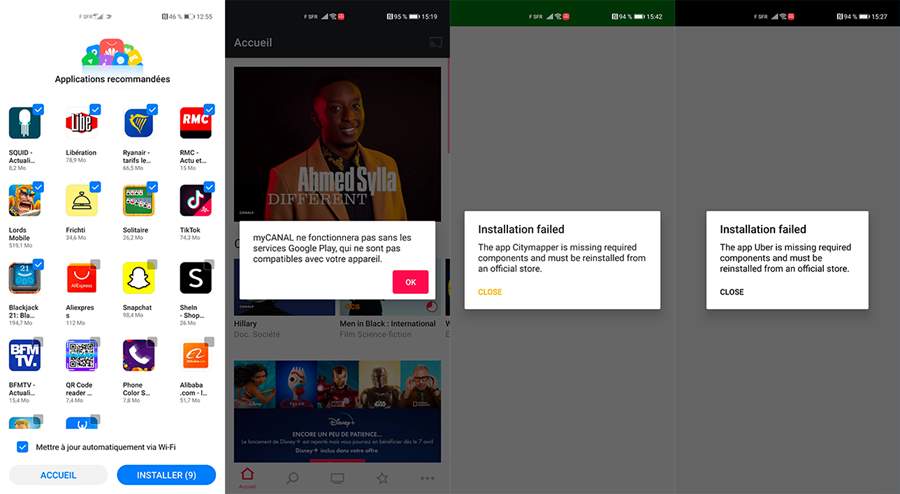 As incredible as these Huawei P40s are, remember that these smartphones are deprived of Google services. This poses huge problems to the use.

For example, in the first configuration, it is impossible to recover many applications from your old smartphone.

All Google, Facebook, Uber, etc. apps are grayed out… If you want to get them back yourself, by downloading their APK, you will then discover that they don’t all work.

Citymapper, Uber, YouTube, Yuka, PathéGaumont, to name but a few, don’t boot on the Chinese giant’s new devices (they use Google APIs, which are absent from this smartphone).

Instead, Huawei recommends that you go through your browser and opt for their web versions. It works, but do you really want a smartphone that’s incompatible with a bunch of popular applications?

In the long term, Huawei is banking on its HMS (Huawei Mobile Services) to fill the gap. Many apps reach its AppGallery app store every day, even if, let’s face it, it is still very empty today.

Next to the Play Store, it looks really pale (especially since there are some very strange interface bugs, like texts written in Chinese.

New for 2020, when the AppGallery doesn’t have the application you’re looking for, it can redirect you to its publisher’s site or third-party platforms.

However, this solution has one important negative point: your applications won’t be updated by themselves.

Instead, we recommend that you opt for third-party stores such as the Aurora Store, even if, once again, nothing tells you that an application will work once it is installed.

Getting a Huawei smartphone these days is a bit of a lottery. Fortunately, the brand promises many improvements in the course of 2020, including a notification system to alert you when APK updates the installed applications when they become available.

The brand is also launching its video calling service MeeTime (a competitor to FaceTime and Google Duo) and Huawei Music, its competitor to Spotify (with three months free and then a subscription at 9.99 euros per month).

As it stands, we find it difficult to recommend the P40 range. Marketed respectively at 799 euros, 1099 euros and probably more than 1300 euros for the top of the range if it arrives in France, the Huawei P40, P40 Pro and P40 Pro+ still encounter major software problems and are not intended for all audiences.

Can Huawei make it?

Huawei has assured us that a VIP hotline for customers of these devices will answer all their questions about installing applications.

We still find this difficult to manage in the long term. Moreover, according to our information, Google would now remotely block the clandestine installation of its services on Huawei devices… Can we create the best smartphone in the world without Google?

How Huawei, deprived of Google, is planning his counterattack

All the news High Tech from Las Vegas