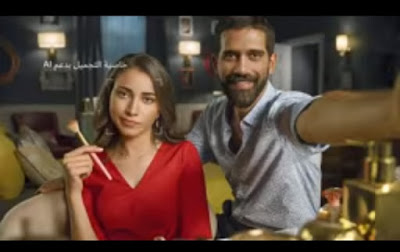 A woman is wearing make upon her face. Not to mention he was finished, his partner suddenly caught Huawei Nova 3 smartphone to take a selfie .
Click! Photos were made. The woman looks surprised because her face looks beautiful in the photo, even though make up is not yet fully applied. Maybe this is because artificial intelligence (AI) in Nova 3 is able to make his face look charming, even though make up isstill halfway.
At first glance there is nothing strange with the scene in the video advertisement intended for the audience in Egypt. However, it was later discovered that the selfie shot was not from a camera owned by Huawei Nova 3, but a DSLR camera.
This was revealed after the female actress, Sarah Elshamy uploaded the behind-the-scenes photos from the production of the relevant advertisement to her Instagram account. Well, one of the photos shows that the man’s hand turned out not to hold anything when acting selfie .
Instead of a cellphone, another crew member positioned a DSLR camera in his hand, to mimic the point of view of the cellphone used by the selfie . Be a selfie , it looks like Nova 3’s shot, even though it’s actually not.
behind the scene photo of Huawei Nova 3 ad production in Egypt uploaded by actress Sarah Elshamy to Instagram. Seen male actors only pretend to stretch their hands without holding the cellphone, while pictures are taken by other crew members with DSLR cameras, by imitating the selfie viewpoint.
In the ad there are three other selfie scenes in day and night conditions. There is a possibility that not only one will be taken with a DSLR camera.
Huawei itself does not actually claim in advertisements that selfie results are Nova 3 shots. However, the visuals are impressive, and potentially misleading for potential customers who see.
This is not the first time Huawei has been caught using a higher-powered camera to advertise its cellphone shots. The Chinese manufacturer has put photos from the Canon 5D Mark III full-frame DSLR camera in the P9 smartphone photo sample gallery in 2016.
The full Nova 3 ad video can be seen at the following link.

China Wrath of Huawei 5G was banned by Australia