OnePlus 8 and 8 Pro officially presented: a serious step up the range 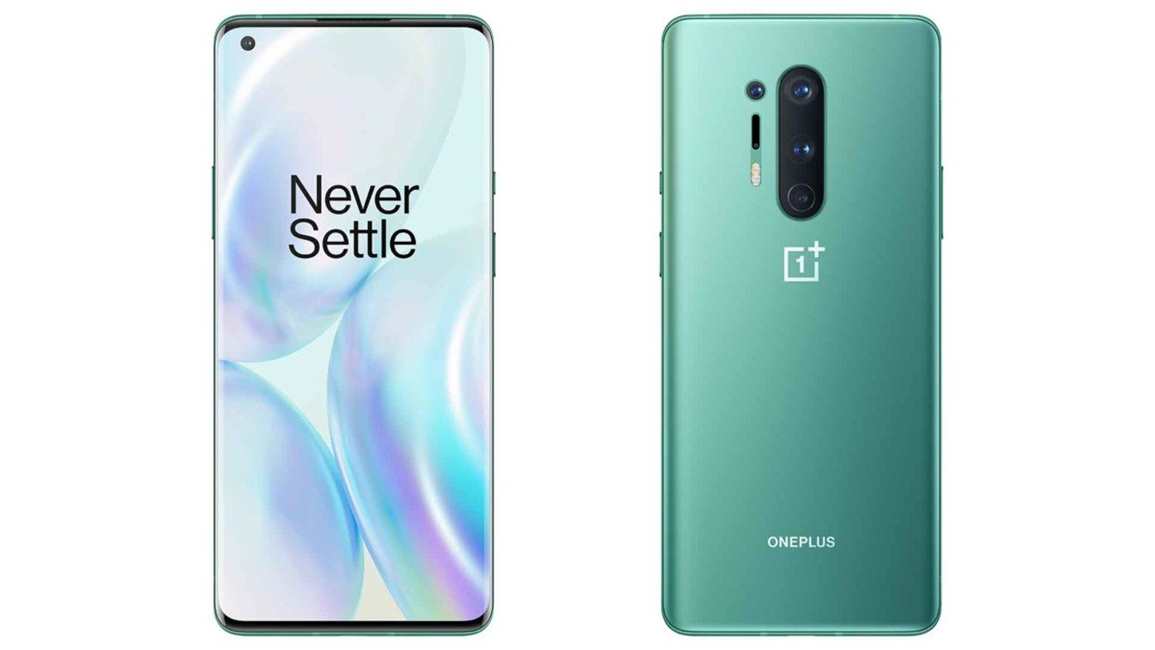 OnePlus 8 and OnePlus 8 Pro are the new premium smartphones from the Chinese manufacturer.

Improved design, wireless charging, new features, 5G compatibility… OnePlus wants more than ever to play in the big league, even if it means raising its prices once again.

We were expecting to discover three smartphones, OnePlus finally announced only two.

During a video conference broadcast online due to the coronavirus pandemic, the famous brand presented it’s OnePlus 8 and OnePlus 8 Pro, the respective successors of OnePlus 7T and OnePlus 7T Pro.

In addition to being the first OnePlus smartphones to carry the new brand logo, the OnePlus 8 is the first 100% 5G series from the Chinese manufacturer.

Last year, the “Pro” model certainly made the owners of the classic model jealous.

OnePlus’ most expensive smartphone had a curved screen, giving it a more modern look.

This year OnePlus is offering this distinction to its two smartphones. Both OnePlus 8 and OnePlus 8 Pro have a curved screen.

We have to admit that we prefer the small OnePlus 8 which, thanks to its weight of 180 grams and its thinness, is a joy to handle.

After trying out the pop-up camera last year, OnePlus is returning to something more classic in 2020.

Both OnePlus 8s conceal their front camera in a tiny punch (3.83 mm diameter) located in the top left corner of the smartphone.

Why did you make this choice? OnePlus explains that this allows them to make their smartphones watertight.

Indeed, for the first time, the OnePlus 8 Pro is IP68 certified.

The OnePlus 8 is also water-resistant… but without certification, because it would have cost too much money.

The brand, therefore, decided to reserve this argument for the most expensive model, which absorbs costs more easily (note that in the United States, all OnePlus 8 are IP68 certified at the request of T-Mobile, the operator that markets them).

Another differentiation for the move announced several weeks ago is that OnePlus 8 Pro has a 120 Hz refresh rate display, making its navigation extremely fluid.

As on the Galaxy S20, we love this new feature! Let’s hope that it won’t make the battery life drop too much, especially since it’s possible to cumulate 120 Hz and QHD+ definition at OnePlus, where Samsung forces the use of Full HD+ on its smartphones to preserve the battery.

The classic OnePlus 8, on the other hand, only requires a Full HD+ panel at 90 Hz. It’s smoother than most competing smartphones but not as magical as the OnePlus 8 Pro.

Knowing OnePlus, there is no doubt that its successor, the OnePlus 8T, will switch to 120 Hz.

Among them are “Glacial Green”, “Interstellar Glow” (which reminds us of the Instagram logo), and “Ultramarine Blue”, a very successful blue. We salute the efforts of the OnePlus design teams.

Between the Huawei P40s released a few days ago and the OnePlus 8, we are delighted with this new color variety.

After Xiaomi, it’s OnePlus’ turn to show its attachment to Google. Do you see this as a provocation to Huawei? You’re probably right.

The proof, on the OnePlus 8 box, is the inscription “with easy access to the Google applications you use the most”. The Chinese brand is probably taunting its fellow countryman who is deprived of the Google ecosystem.

In fact, OxygenOS, the overlay used by OnePlus, is evolving in this direction.

The OnePlus Shelf menu, which is revealed with a swipe of a finger, on the left side of the device, is giving way to Google

Discover, which has been requested by fans for a long time. The home screen also provides quick access to Google Duo and Google Assistant.

The latter is quickly accessible by pressing the unlock button for a few seconds or by making a simple gesture from the lock screen… Finally, with the new OnePlus, you can even play on Stadia.

In short, as you can see, OnePlus and Google have become much closer this year. To hurt Huawei, this strategy is undoubtedly effective.

Not surprisingly, these devices are extremely powerful and run all applications without a hitch. Other lighter changes are also present, such as improved haptic feedback.

Once again, OnePlus offers one of the best experiences on the market.

Typing on the keyboard or unlocking your smartphone sends very light vibrations, which makes it feel like you are in communion with the device.

The fingerprint sensor under the display also offers a larger surface area than before, making it easier to unlock your smartphone. 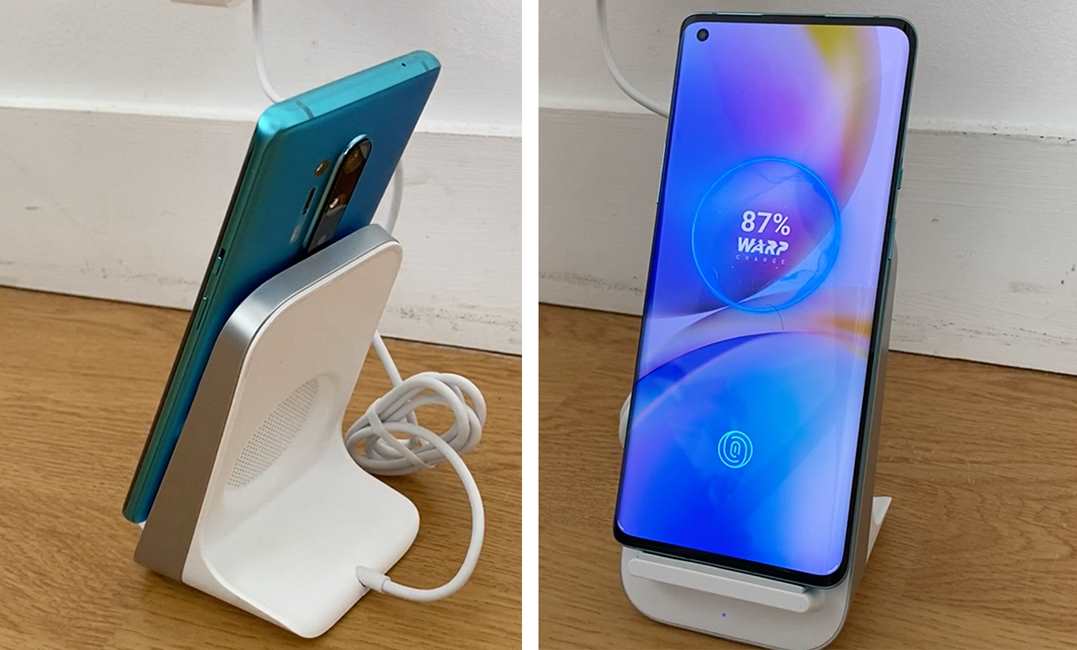 The OnePlus 8 has a 4300 mAh battery while the OnePlus 8 Pro, the larger of the two, has a 4500 mAh battery. Is that enough for a 120 Hz and 5G smartphone? Our laboratory tests will determine this.

According to our initial measurements, it takes 57 minutes to fully charge an OnePlus 8 and 1h02 for an OnePlus 8 Pro with the 30W corded charger provided in the box.

Of course, the real novelty of this new generation is the arrival of wireless charging.

Reserved for the 8 Pro model, it allows you to recover 50% of autonomy in 30 minutes using the 30W OnePlus wireless charger sold as an option (69 euros).

The mobile is also compatible with any other Qi support but, logically, will recharge less quickly with these devices. It can also charge other smartphones or accessories thanks to a 5W reverse charging mode.

Is OnePlus finally better in pictures?

Lately, we have been very critical of the camera in OnePlus smartphones.

We quickly realized that the brand’s mobiles were suffering from noticeable slowness and that the quality of the photos was not at all up to the competition.

OnePlus is aware of this and therefore knows that it is eagerly awaited with this new generation.


The OnePlus 8 Pro is the most interesting smartphone in this range.

Like the Oppo Find X2 Pro, it is equipped with Sony’s new 48 Mpix IMX689 sensor, which is distinguished by its large size of 1/1.43 inch. This new camera’s mission is to improve the quality of low-light shots, and so far, we seem to be delivered pretty much on that promise.

Initial tests show that the OnePlus 8 Pro is faster than its predecessors (without matching some competing mobiles like the Huawei P40 Pro or the iPhone 11 Pro) but unfortunately it does not offer the quality worthy of an ultra-premium smartphone.

The OnePlus 8 Pro is also equipped with an ultra-wide-angle module attached to a 48 Mpix sensor (the IMX586 used last year as the main sensor).

OnePlus adopts a strategy similar to that of its competitors to have better pictures in ultra-wide-angle. This sensor is also used for macro photography.

There is finally a telephoto lens for an optical zoom x3 (attached to a sensor of 8 Mpix) and, it is a surprise, a sensor dedicated to color filters.

Of 5 Mpix, it allows Instagram or Snapchat fans to improve their photos before publication. We don’t really know how it works yet.

We feel that here, OnePlus has mostly put a third photo module to make it look nice …

In addition to these hardware changes, let’s welcome the arrival of new software features such as an audio zoom similar to that of Samsung and Apple or the “Smart Pet” mode, created to correct slow motion problems.

The latter allows you to take a picture of a moving object and freeze it, to make the photo usable. It’s as if the brand has responded exactly to our criticisms. We’ll see if the promise is kept.

Prices are going up… again

Available from 21 April, the new OnePlus 8s cost more than their predecessors.

Depending on the brand, these increases are due to the arrival of the 5G.

This is still significantly cheaper than the Samsung Galaxy S20. OnePlus even manages to offer its new smartphones 100 euros cheaper than the Xiaomi Mi 10, a token of its good faith towards its fans.