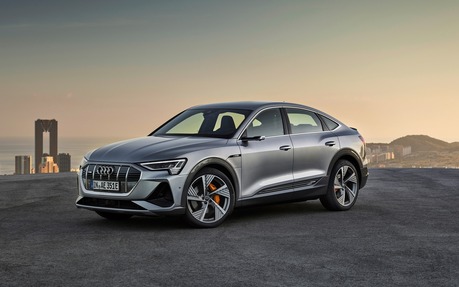 Audi revealed, as expected, its e Tron electric SUV Sportback. A four-door coupe with a charming look marked by an octagonal grille with horizontal slats, a muscular body and a roofline that drops “abruptly to the rear” of the vehicle.

In short, this zero-emission vehicle has a lot to offer from a purely aesthetic standpoint.

This SUV has a 60-liter front trunk and a total luggage capacity of 615 liters. The vehicle also features 20-inch wheels, sport-tuned air suspension, and optional virtual outside mirrors. 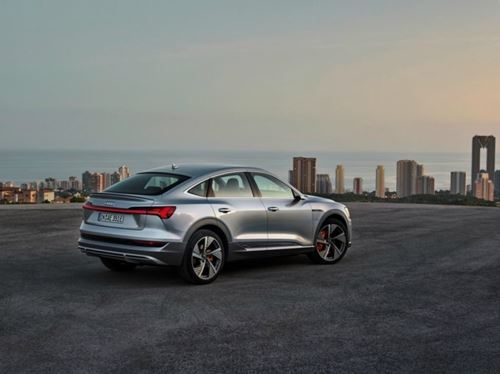 The firm from across the Rhine insists on the presence of Matrix LED digital headlights, a high-end technology present from the first level of finish.

The press release published by the German group states: Their light is broken down into tiny pixels and illuminates the road in high resolution.

The German group also praises the aerodynamics of its product, which has a direct impact on range.

“Approximately 10 kilometers of this increased range compared to the e-Tron can be attributed to the vehicle body, the more favorable aerodynamics,” says Audi.


The range, in fact, is 446 kilometers according to the WLTP approval cycle, thanks to a battery with 95 kWh of gross energy (86.5 kWh of net energy).

The result: the e-Tron Sportback is capable of reaching top speeds of 200 km/h and accelerates from 0 to 100 km/h in just 6.6 seconds, or 5.7 thanks to a “boost” mode that is active for just eight seconds.

All these figures are to the credit of the most powerful of the versions, the 55 Quattro.

This is a relatively short range for a station wagon that is normally designed to cover medium and long distances. 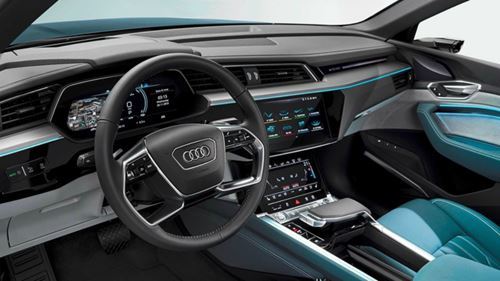 At the dawn of the 2020 vintage, Audi logically plays the card of modernity and connectivity.


Its teams have thus implemented the “MMI touch response” operating system within its double screen located between the driver and the front passenger. “When the finger actuates a function, a haptic and acoustic confirmation is triggered,” he explains.

The passenger compartment is equipped with a 12.1-inch touch screen at the top to “control infotainment, telephony, navigation, and dedicated e-Tron settings”, while the lower 8.6-inch screen “allows text entry and management of comfort functions and temperature control”.


A third 12.3-inch screen (1920 x 720-pixel resolution) as a digital instrument panel invites itself in front of the driver.

To top it all off, Alexa Voice Assistant will give users the opportunity to manage certain features with their voice alone. “The service provides access to more than 80,000 Alexa commands,” Audi said.

The service provides access to more than 80,000 Alexa commands,” said Audi. “And a final touch of connectivity is provided by the Audi connect digital key, supported by the myAudi mobile application.

In addition to its compatibility with the e-Tron Charging Service, which provides “access to almost 120,000 public charging points in 21 European countries”, this zero-emission SUV can be charged on direct current up to 150 kW (120 kW for the 50 Quattro version).

This means that 80% of energy can be recovered within 30 minutes. Alternatively, the 11 kW alternating current public stations can be used.

Finally, the final offer consists of thirteen body tents, a limited edition “edition one” (plasma blue color) and a basic version available for pre-order at the end of November 2019, before deliveries start in spring 2020.


The press release indicates German prices: 71,350 euros. This is an onerous cost compared to its future competitors: the Tesla Model Y and the Ford Mustang Mach E, for example, will cost 58,000 and 48,990 euros, respectively.