It’s the big day for Samsung. Who just announced a burst of new products, including the Galaxy S20 Ultra, its new flagship, as well as a brand new folding smartphone, the Galaxy Z Flip.

The world’s number one smartphone company today held its major annual Unpacked conference, where it unveiled its flagship devices of the year.

Samsung wastes no time and unveils its new folding smartphone from the very first seconds. The Galaxy Z Flip is indeed the phone that has been leaking everywhere for weeks. It’s a small device that folds up vertically like Motorola’s Razr.

As a reminder, there’s a 6.7-inch Infinity-O Dynamic AMOLED screen with Full HD definition and a 22:9 aspect ratio.

With this foldable screen technology, you won’t get the super-thin edges of the new Galaxy S20, for example. The screen edges are correct, similar to what the Galaxy Fold offered.

Otherwise, the screen technology itself is the same as the Galaxy Fold, but the Galaxy Z Flip’s screen also has a protective layer of glass instead of plastic, which will make it more resistant to everyday use.

The on-board battery is 3300mAh, which may seem a bit of a stretch and is probably one of the reasons why Samsung chose the SoC Qualcomm Snapdragon 855+ instead of an Exynos because, on the previous generation, the Snapdragon is much better optimized to manage the battery and therefore have longer battery life.

The fact of having a foldable screen is very appealing with its “Woah Effect”.

Because the design is different, the Galaxy Z Flip is lighter, and while its weight remains normal when the smartphone is open, once closed, its weight is less evenly distributed and, inevitably, it feels better in a pocket.

Speaking of pockets, what a pleasure it is to find one back in my pocket. You really have to have it in your hand and in your pocket to realize the interest of the Galaxy Z Flip.

By way of comparison, it’s really the same finish as a Galaxy Fold, we find the same hinge and especially the same foldable screen where the fold remains visible but that we forget when using it.

Although it may not be visible, you will notice that the space at the fold of the screen is smaller than on the Galaxy Fold.

We also remind you that the Samsung Galaxy Z Flip offers a truly foldable screen and not a screen that you “roll-up” like the Motorola RAZR. 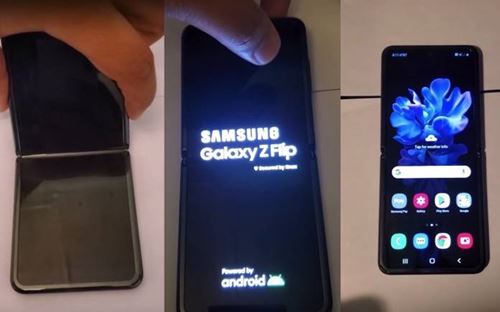 After the first North American returns, the biggest advantage will be the hinge, which is not as exposed as on the Chinese giant’s smartphone. And finally, as you can see, the full external screen that you could get on the Galaxy Fold is gone.

Instead, we just have a small 1.06″ AMOLED screen that will be used for notifications or for small basic actions such as pick up/down for example.

While the Galaxy Fold had that foldable tablet approach, the Galaxy Z Flip is really positioning itself as a foldable smartphone.

Everyone has their own philosophy, some will prefer the Z Flip to the Fold, while others are already dreaming of the Fold 2.

With its different design, once unfolded, the screen is long, very long even, hence its 22:9 aspect ratio (compared to 20:9 on the new Galaxy S20) and this time, unlike the Galaxy Fold, a small bubble at the top of the screen will actually house the front camera instead of a notch on the side. Phew!

On the sound side, there are stereo speakers but no jack plug.


In any case, once in hand, the smartphone fits rather well in one hand and you don’t have too much trouble unfolding or folding it. The magnets are not as strong as those on the Galaxy Fold. It will take a little time to adjust, however.

Photo and the Selfies in the spotlight 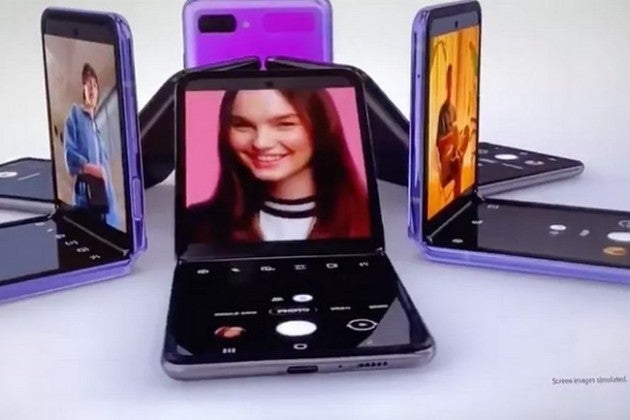 While photography remains an important aspect of the Galaxy Z Flip, it won’t be as well equipped as the Korean manufacturer’s other premium smartphones.

Indeed, the Galaxy Fold carries a photo block similar to that of the Galaxy S10 and Galaxy Note10. Well, that’s pretty much the case with the Galaxy Z Flip.

In fact, remove the phone and TOF sensor from the Galaxy Note10 and you have the Galaxy Z Flip photo block.


Without really testing it yet, we should find similar results to the S10, which is great in itself.

On the other hand, the super-fast “Dual Pixel” autofocus can be found on the main camera as well as on the front camera, which is a real plus for the selfies.

Moreover, speaking of the front camera, we find the same sensor as on the Samsung Galaxy S20 and it goes without saying that the main axis of communication of the Galaxy Z Flip will be selfies and video telephony, hence the partnership with Google on the subject that allows Google Duo to be optimized for Samsung smartphones.


And back to selfies, that’s where the Galaxy Z Flip particularly. Indeed, because it can be used half unfolded, it provides an excellent grip when taking a selfie, despite the 6.7-inch screen all the same. You have to try it to realize it.

The Samsung Galaxy Z Flip will be available in two colors (Mirror Black and Mirror Purple) from this Friday, February 14th at a price of 1509 euros.