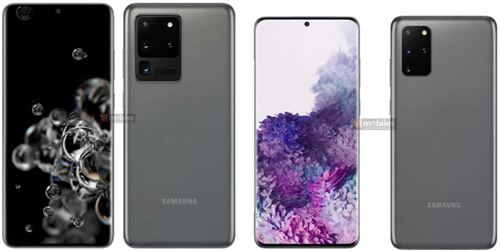 With two weeks to go before their official launch, the Galaxy S20s are suffering from new leaks. Official Samsung images have recently appeared online.

There’s no longer any doubt that Samsung’s next smartphones will be the Galaxy S20.

As you can see from the visual illustrating this article, the Korean brand has decided to go directly from the S10 to the S20.

The three products of this new range will be called Galaxy S20, Galaxy S20+, and Galaxy S20 Ultra. The promotional image recovered from leakers like Evan Blass also confirms the existence of the Galaxy Buds+, Samsung’s new wireless headphones.

They will be offered when you pre-order an S20+ or S20 Ultra.

Another confirmation in the last few days (notable thanks to the leaker Ishan Agarwal), the Galaxy S20s will be sporting a huge rectangular photo block.

On the Galaxy S20 Ultra (the only one with a 10x periscopic zoom), it should be particularly visible. We’re waiting to see the mobile in front of us to get a better idea of this large and inelegant block.

As a reminder, the Galaxy S20 range will be announced on February 11th in San Francisco.


Samsung should also take the opportunity to announce the Z Flip, its second folding smartphone.