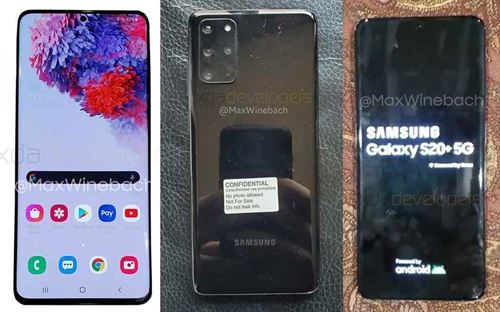 The Galaxy S20+ (Galaxy S11+) continues to unveil itself. A few weeks before the official unveiling, a renowned leaker released the first stolen pictures of the smartphone.

This new leak confirms the flagship design, its name and the presence of 5G connectivity on all models.

In partnership with XDA Developers, Leaker Max Weinbach has released the first real-world photos of the 5G compatible Galaxy S20+.

Unsurprisingly, the smartphone is covered by an Infinity-O screen marked with a punch in the manner of Galaxy Note 10.

According to the leaker, the screen is flatter than that of the Galaxy S10. The edges around the panel are particularly thin. However, the bottom edge is still slightly thicker than the other edges.

On the back, there is a quadruple photosensor with an LED flash in the shape of a rectangle.

A small recess suggests that Samsung would integrate a microphone next to the camera. In the last news, this variant would not be equipped with the 108 Mp photo sensor teased in recent months.

This module would finally be reserved for the Ultra declination. Instead, the Galaxy S20+ would rely on a 12 MP photosensor, says XDA Developers.

Finally, we note the absence of the physical button to call Bixby, the home voice assistant developed by Samsung. The third photo published by Max Weinbach finally confirms the name of the range: Galaxy S20 instead of Galaxy S11. 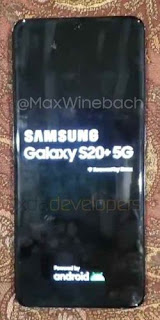 In a later tweet, Max Weinbach reveals the list of the 5 variants that will be marketed this year. Unsurprisingly, Samsung will offer all models in 4G or 5G versions. Only the Galaxy S20 Ultra will only be available in a 5G version.

As a reminder, Samsung will present the Galaxy S20 along with the Galaxy Fold 2 at a conference in Francisco on February 11th, just a few days before the opening of the MWC (Mobile World Congress) in Barcelona. We’ll tell you more as soon as possible.