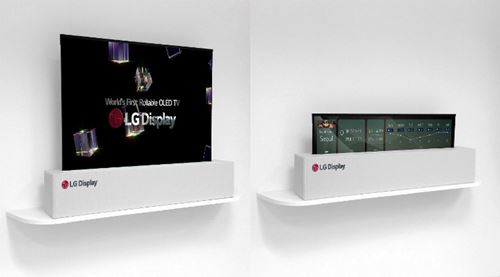 The LG OLED65R9, 65 for 65 inches, R for “rollable” and 9 for 9 series. According to LG, the R would also be associated with “Rise”, as this model literally seems to spring from its base, but also “Revolution”, as it is the first of its kind. A rather classic nomenclature for an LG television, yet very innovative.

For if the concept had already been presented at CES 2018, it was not yet complete at the time. The audio part, for example, wasn’t there. Now this OLED R9 is a product that is ready for use, as you can see in our video. 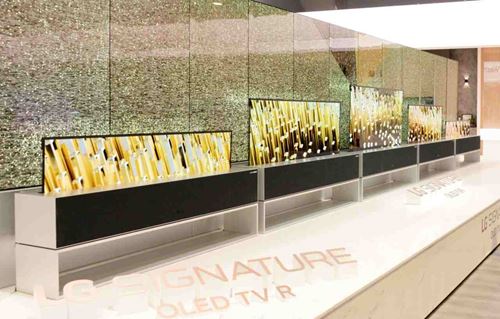 Naturally, this OLED65R9 is part of the Signature family, which includes all of LG’s prestige products.

There are household appliances, but of course, there are TVs, such as the OLED65W8, a TV that wants to be as discreet as possible, just like this new OLED65R9 model, which can even adopt different displays and opening modes.

First of all, there is a “Zero View” mode, in which the TV remains rolled up in its base.

Only the Dolby Atmos 4.2 audio system with 100 watts RMS is then used to listen to music. The “Line View” mode allows only part of the screen (about 25% of the surface area of this 65-inch slab) to be deployed to display a few widgets (weather, appointments, etc.). Finally, the last mode is called “Full View”, in which the screen is fully deployed.

In spite of its delayed market launch, LG’s roll-up TV continues to create a sensation at CES. In its latest iteration, in CES 2020, the Korean manufacturer’s flagship model is rolled from top to bottom. 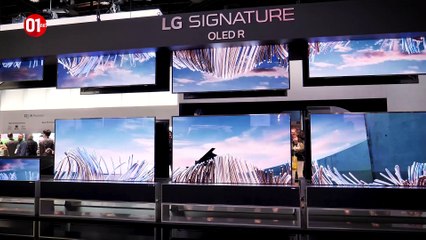 LG has promised it: the rewindable is for this year, and even for this summer! No matter if the promise has already been made many times, the OLED R, seems ready to invade… luxury hotel suites.

As it has been doing for the past three years, LG has chosen to showcase its in-house technology at the CES. The Japanese manufacturer didn’t really present a new version of its roll-up screen.

The only novelty compared to the model that should have been released at the end of the year is the arrival of the third generation Alpha processor. For the rest, it is in all points the same model as last year.

On the other hand, LG has decided to respond to the requests of some observers who, apart from saluting the technical prowess of the roll-up, regretted that the screen does not unfold from top to bottom.

The Korean manufacturer has therefore presented an inverted version of its OLED R. This time, the screen unrolls like a roller shutter and unfolds from the ceiling to the floor in the lounge.

For the time being, this is by no means a definitive product, as LG wanted above all to prove that it was capable of such a development.

The FBI warns that the smart TV is spying on you