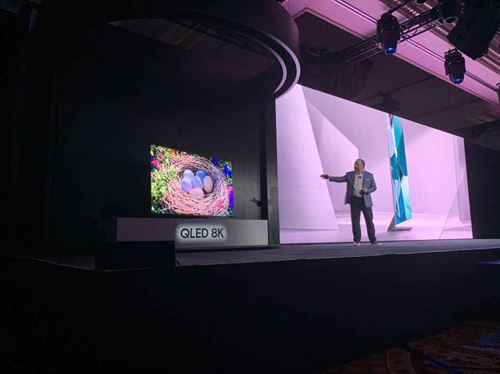 As the first highlight of the CES 2020, Samsung’s “First look” conference showcased the Samsung Q950T, the brand’s new high-end TV.

The images that leaked a few days ago were very real, Samsung has indeed launched a borderless TV to open the 2020 edition of CES.

The Q950T will be the new premium representative of the Korean catalog, with a design that is sure to knock your socks off.
The terms “borderless” have serious marketing connotations when applied to screens. However, with a tile that occupies more than 99% of the display surface, the Q950T almost manages to make its contours disappear.
To achieve this result, Samsung would have used a new method of gluing the panel as close to the chassis as possible. The impression that the panel hugs the edges are even more obvious when facing the Korean’s new flagship TV.
Inside, Samsung has renewed its most advanced processor, the Quantum Processor AI 8K. But unlike last year, it now relies on deep learning (rather than machine learning) to analyze images, especially in the upscaling process.
The other a major evolution of the QLED 8K is to be credited to the audio part. This has been the subject of specific work and complete renewal.

Not only is the audio the system more efficient (despite the increased finesse of the TV), but it is also more powerful with sound analysis functions as well. 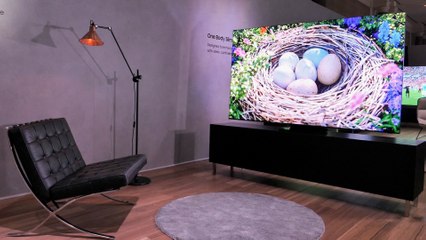 Indeed, the Q950T inaugurates two new features that will gradually be integrated into the Korean manufacturer’s range.

First of all, there is audio tracking sound + which, as its name indicates, is an audio tracking process that allows the sound to be spatialized according to its area of origin on the slab.
An example: if, in a tracking scene, a car crosses the screen from left to right, this feature allows, in principle, to have the impression that the sound moves on the screen at the speed of the car.
As for the active voice amplifier, it also offers a better acoustic experience by increasing the volume of the dialogue according to the situation.
If in an action scene, the actors’ lines are not very audible, this option readjusts their volume in real-time.

Thanks to a microphone placed on the lower edge of the TV set, the active voice amplifier can also take into account ambient noise, such as a vacuum cleaner being passed next to the TV, for the same result.
Finally, the Q950T also includes a few other secondary software innovations such as “Multiview”, i.e. the ability to reproduce the screen of your smartphone on a part of the screen while continuing to watch your program.
It is also able to adjust the brightness and contrast of the image according to the lighting conditions in the room.

Finally, like other high-end TVs from Samsung this year, this model will no longer be content with Bixby but will directly integrate Google Assistant and Alexa.
Find all the CES 2020 news on News Tech

The price and availability of the Samsung Q950T is not yet known, but the manufacturer has already announced that the QLED 8K TV will be available in France in three sizes: 65-inch, 75-inch and 85-inch.

Big Data: What is Big Data?