The calendar of high-tech events for the year 2020 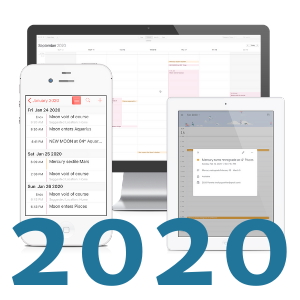 If you regularly follow the news of new technologies, you know for sure that its pace is particularly high. In this fast-moving sector, brands present many new products every year and leave very little space for silence.
On top of that, there are the traditional trade fairs such as the CES in Las Vegas or the development conferences of major companies, such as Apple’s WWDC.
To help you not to miss anything, I propose you a schedule of the major high-tech events of 2020. We will update and enrich it throughout the year as dates are confirmed.
January 2020
– CES, January 7 to 10: as tradition dictates, the first technological announcements of the year will take place in Las Vegas.
February 2020
– Samsung Unpacked 2020, mid-February: As in 2019, Samsung is expected to unveil its new high-end smartphones in February. The Galaxy S11 should succeed the S10, while the long-awaited second folding smartphone from the Korean brand should make its debut. Rumour has it that the conference will take place on February 11th or 18th.
– The US decision on Huawei on February 16: The US is expected to give its decision on the banning of Huawei on February 16. It is possible, however, that the US government will postpone its decision, as it has already done twice.
– Mobile World Congress, February 24-27: the largest trade fair dedicated to the world of smartphones, the MWC in Barcelona is expected to be the place where many devices will be presented.
It would not be surprising to see new folding mobiles, such as the Motorola razr.
March 2020:
– An Apple conference? In March, Apple organizes from time to time surprise keynotes. If services had been in the spotlight in 2019, the iPad Pro could be renewed in 2020. It is still difficult to decide on the subject.
– Huawei P40 and P40 Pro, end of March: Huawei will unveil the P40 Pro, its new high-end smartphone, in Paris at the end of March.
This smartphone could break photo records, thanks in particular to an exceptional optical zoom. Unfortunately, this device may not be compatible with Google services.
– Disney+, March 31: Available in the United States since the end of 2019, the Disney+ streaming service will arrive in France on March 31 at a rate of around $6.99 per month.
Thanks to its very rich catalogue of Disney, Marvel, Star Wars and Pixar classics as well as its many original contents, Disney+ hopes to shake up Netflix.
April 2020:
Nothing announced yet.
May 2020 :
– Facebook F8, May 5-6: In early May, Mark Zuckerberg will present all the upcoming new features for Facebook, Instagram and WhatsApp. We may also see new products, such as the Portal connected speakers.
– Google I/O, early May: Google’s traditional developer conference should take place a few days after the Facebook event. It’s on this occasion that Google should announce all its new software like Android 11 and some products like Pixel 4a.
– Microsoft Build, May 19-21: Last developer conference of May, Microsoft Build should be the opportunity to discover the future update of Windows 10.
We also hope to discover more about the Surface Duo and Surface Neo, respectively smartphone and tablet working with two screens, especially thanks to Windows 10X.
– A PS5 conference? Sony is expected to unveil its PlayStation 5 a few days before the big gaming show, E3. The console should be available by the end of 2020.
June 2020:
– WWDC, early June: Apple’s major developer conference is scheduled for early June. Tim Cook should unveil the new versions of iOS and macOS as well as some new hardware.
– E3, June 9-11: This edition of E3 in Los Angeles will certainly be one of the events not to be missed! Everyone should be talking about next-generation consoles, which should be in the spotlight in the aisles of the show.
In addition to the PS5, we should learn more about the Xbox Series X, Microsoft’s future console. There’s also a good chance that cloud gaming will be the talk of the town.
July 2020:
Nothing announced yet.
August 2020:
– Samsung Galaxy Note 11, early August: Logically, Samsung should unveil its Galaxy Note 11 from New York. It is also likely that a new foldable smartphone will be launched on the same date.
September 2020:
– IFA, September 4-9: A catch-all show, the IFA in Berlin is usually an opportunity for manufacturers to launch a few new products before the end of the year. Household appliances and televisions are usually in the spotlight.
– iPhone 12, second week of September: it is historically around September 10 that Apple announces its new iPhone. This year, the Cupertino-based company should introduce a new design and offer 5G compatible devices.
October 2020:
– Made by Google, early October: Google is expected to hold its traditional conference announcing the new Pixel smartphones. It should also discover new connected products belonging to its Nest ecosystem.
November 2020:
Nothing announced yet.
December 2020:
– Qualcomm Tech Summit, early December: Hawaii is expected to host the final big tech conference of 2020. As usual, Qualcomm is expected to unveil all of its new innovations, starting with its new high-end processors.
As you may have noticed, many marks are missing from this calendar. Xiaomi, OnePlus, Honor, Oppo, Nintendo and Tesla, to name but a few, are all difficult to predict and can announce new things at any time.  We are also waiting for Salto, the French streaming service.