The end of Microsoft’s support for Windows 7

Windows 7 was one of Microsoft’s most popular computer operating systems and most of us still use it.

Microsoft’s decision is not surprising. The ten-year-old operating system, which was launched on July 22, 2009, may have been incredibly popular – and it still is, according to NetMarketShare data from September 2018, 40.88% are still using Windows 7 – compared to 37.44% who switched to the latest operating system, Windows 10.

However, in the shadow of Windows 10’s success, it makes sense for Microsoft to devote all its time and effort to improve the new operating system.

But like all operating systems before it, Windows 7 will eventually reach the end of its lifecycle, making upgrading an absolutely essential task for the security of your PC.

Microsoft will continue to provide updates for the Microsoft Security Essentials (MSE) application, which is the built-in antivirus program included in Windows 7.

This is despite the fact that Microsoft itself publishes an updated FAQ on Extended Security Updates for Win 7, which states that “your computer is not protected by MSE after the deadline. MSE is unique to Windows 7 and follows the same lifecycle dates for support.

This has made it clear that MSE will not protect Win 7 users once it reaches the end of its life cycle when Microsoft will no longer support or update the aging operating system, but Microsoft seems to have changed its mind.

When does support for Windows 7 end? 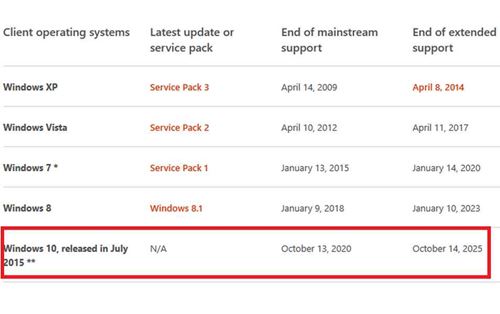 Is Windows 7 still safe to use?

Once an operating system enters extended support, it is still very safe to use, which means that Microsoft will continue to correct all security threats but will not add any new features (as it would during the “primary support” phase).

As such, the company is releasing a Win 7 update – KB4493132 – that will display notifications reminding Windows 7 users to upgrade to Windows 10 before the end-of-life date. This update is optional, but anyone with automatic updates enabled will receive it.

Microsoft also promises that the notification won’t be too intrusive, and you can prevent it from reappearing, but this shows how serious Microsoft is about getting people to stop using it.

When Windows 7 reaches its end-of-life phase on January 14, 2020, Microsoft will stop releasing updates and patches for the operating system. It is also likely that it will not offer help and support if you encounter problems.

However, this does not mean that it will stop working on January 14, 2020 – you will still be able to use it for as long as you want. So, the good news is that you won’t wake up on January 15th to find that your Win 7 PC won’t boot anymore.

The biggest problem with continuing to use Windows 7 is that it won’t be fixed for new viruses or security issues once it reaches the end of its life, making you extremely vulnerable to emerging threats.

In addition, if large numbers of people continue to use Windows 7 after the end-of-life date, this could actually be a great incentive for malicious users to target them with viruses.
Note from the support.microsof
Windows 7 Support Lifecycle
Microsoft made a 10-year commitment to support Windows 7 when it was released on October 22, 2009. At the end of this 10-year period, Microsoft will discontinue support for Windows 7 in order to focus its investments on supporting new technologies and experiences.

After that date, technical support and Windows Update software updates to protect your PC will no longer be available for the product.

Microsoft strongly recommends that you upgrade to Windows 10 before January 2020 to avoid a situation where you will need service or support that is no longer available.

Coronavirus: Side effects of chloroquine Researchers between hope and mistrust