The Truth About Programmed Obsolescence 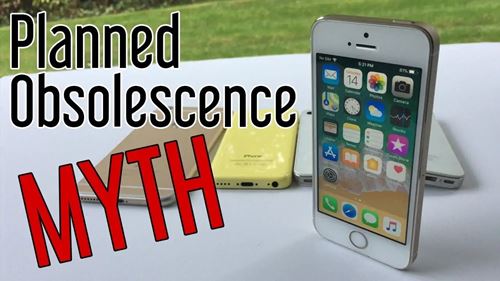 The term programmed obsolescence refers to a set of techniques aimed at shortening the life span of products. It is widely accepted that some TVs, smartphones, and other technological gadgets have a deliberately short life span, which will force you to replace them, this is what is called Programmed Obsolescence “P.O.”.

“They don’t make them like they used to,” says the idiom. So it would seem for the centennial light, an astonishing record, 115 years after someone first turned it on, this bulb still glows dimly in a fire station in Livermore, California.
You can see it yourself on a webcam that updates every 30 seconds.

Some manufacturers are accused of practicing programmed obsolescence with some of their products.

In 2017, this term was in the headlines. Opening of an investigation against the printer manufacturer Epson, apologies from Apple, which admits having slowed down its old iPhone models. The subjects where this practice is cited are multiplying. And its use divides widely.

Planned obsolescence, describes a strategy to deliberately ensure that the current version of a given product will become obsolete, or unusable within a known time frame. This proactive approach ensures that consumers will seek to purchase even more in the future, thereby increasing demand.

Obsolescence can be achieved by introducing a superior replacement model, or by intentionally designing a product to cease to function properly within a specific time frame.

In both cases, consumers will theoretically prefer products of later generations over older ones.

In recent years, the term programmed obsolescence has been regularly associated with household appliances, such as washing machines or dishwashers, which are said to be less durable than when they were first produced.

Technological objects are also regularly cited for the same reasons with examples of computers or smartphones that would become obsolete after only a few years of use.

For a totally modern example, let’s consider smartphones. These handsets are often discarded after a few years of use. The screens or buttons break, the batteries run out or their operating systems no longer receive updates, etc.

However, a solution is always at hand: new models are released every year or so, and presented as “better than the previous one”. 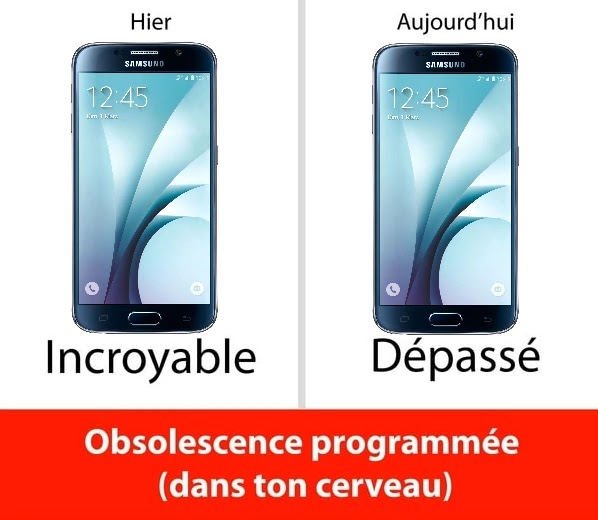 Several trials have taken place, and are there to confirm that this is a reality. Thus there was indeed a chip on the ink cartridges, and even on some printers, so as not to print more than a pre-defined number of pages.

However, today everything is blurred, it is more and more difficult to prove the reality of programmed obsolescence.

However, they are sold for more than € 20, whereas on average consumers buy stockings for € 4. The cost of the product leads to a reduction in quality. But is this decrease linked to the budget, to a company’s desire to keep a very interesting margin or to the desire to sell more products?

So far, no study has been able to prove the existence of this practice. In the majority of cases, it remains very difficult to distinguish between natural wear and tear of products and their components and a deliberate desire to reduce the life span of a product.

In the case of Apple, for example, batteries do indeed lose capacity and power over time and successive recharges, so it may seem normal that their performance decreases over time. 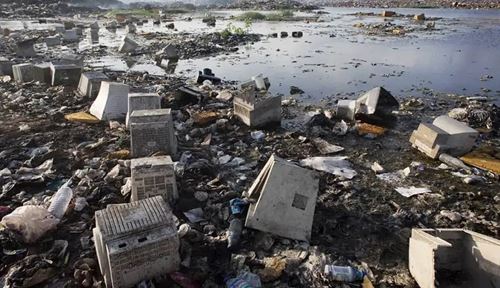 In addition to the economic and social impacts, programmed obsolescence harms our environment by depleting the resources of our planet.

The demand for high-tech equipment continues to grow, and it takes more than 70 components, some of which are made from rare metals and require a large amount of energy, to make a smartphone.

This leads to the intense exploitation of raw materials, such as metals, at a time when our planet’s resources are limited.

This phenomenon contributes to :

Climate change, to find deeper and deeper metals, to extract, transport, and transform them…) the destruction of fertile land and the decrease of biodiversity.

Each year, we produce 573 kg of waste per person! And the constant renewal of goods generates more and more waste.

How long has this been going on?

The concept is far from new. It was in 1932, that the American real estate agent Bernard London, for the first time evoked what he called at the time, “planned obsolescence”. In a 20-page booklet, still available online, he laid the foundations of this concept and its interest for manufacturers and the economy.

What does the law say

“The set of techniques by which a market maker aims to deliberately reduce the life of a product in order to increase its replacement rate.

This is how the P.O, is presented in the law on Energy Transition, adopted in July 2015. On that date, it became an offense punishable by law: 300,000 euros in fines and two years in prison. The amount of the fine can also be increased to 5% of the company’s annual turnover to wipe out the profit generated by the deception.

On a wider scale, the European Parliament has asked the European Commission to legislate specifically on the P.O.

How is wrestling organized?

To fight against this concept, the association HOP (Halte à obsolescence Programmed), born in July 2015, seeks to “raise awareness and influence for sustainable and repairable products”.

Deeply committed to the fight against these deceptions, the association has already filed a complaint against several printer manufacturers and against Apple. The complaint against Epson has therefore led to the opening of an investigation.

Recent awareness of pollution, wasteful use of resources, and the emission of waste and greenhouse gases are pushing more and more consumers to think about their consumption.

Another important factor is also that of household purchasing power, which has declined. Buying second-hand, exchanging or repairing is becoming more and more common practices, and is a way of escaping from the P.O.P.

According to HOP, combating O.P. implies a change in the economic model. This model would be based on a limited, local, qualitative, and above all ecological production of new goods.

It would be a kind of circular, collaborative, functional, social, and solidarity economy that would create new jobs, particularly in the repair, re-use, and service sectors.

According to HOP, the poorest households are the first victims of programmed obsolescence. They suffer a double penalty: because of their purchasing power, they buy poor quality goods, and these goods must be renewed more quickly.

How Huawei, deprived of Google, is planning his counterattack

Born out of a crisis, Bitcoin is perfectly adapted to the current situation