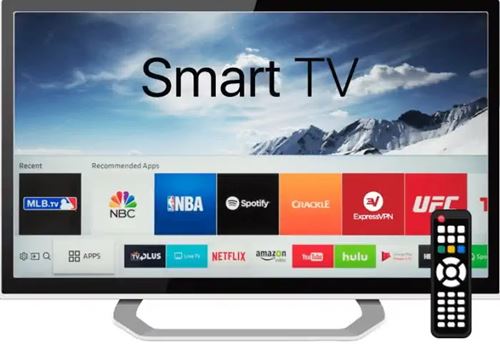 A “Smart TV” is essentially a connected computer with a large screen that specializes in entertainment.

Although conventional TVs have been around for decades, they do only one thing: receive the signal from an HDTV antenna, cable or other A/V source, but today’s connected world is waiting for something smarter.

Smart TVs are available as stand-alone products, but ordinary TVs can also be made ‘smart’ by using box decoders that enable advanced functions.

In addition to being able to passively receive transmission via cable, satellite or over-the-air (OTA), smart TVs are equipped with additional hardware and connection types, as well as a TV operating system with a graphical user interface.

These adaptations allow viewers to access and control the functionality of streaming content from Internet video services and connected devices.

Smart TVs, like smartphones and smart home devices, offer Internet connectivity and support for a range of applications.

This opens up a world of new entertainment options, from streaming video on Netflix and Hulu, to social media checking and controlling an entire house of connected gadgets, including devices that are compatible with Alexa and Google Home enabled products.

The key feature that separates smart TVs from less intelligent TVs is an Internet connection. Almost all smart TVs have an Ethernet port and a built-in Wi-Fi connection (some older models may require an adapter to enable Wi-Fi functionality). This means they need to be able to connect from anywhere in the house. 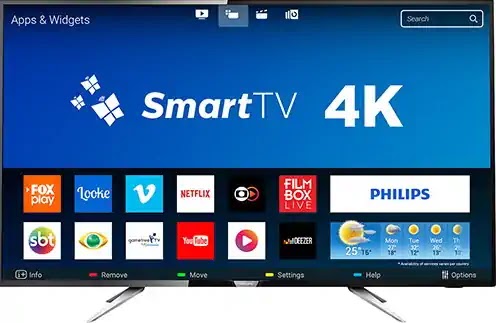 As a general rule, Wi-Fi should be fairly fast in most cases, but if you plan to stream games or 4K Ultra HD content, you may want to connect to your network via cable.

Together with the operating system and applications, the connectors enable video-on-demand services and access to images, music, and videos on connected storage devices. Smart TV applications allow connection to websites such as Youtube, Netflix, Hulu and Vimeo and social media sites such as Facebook and Twitter.

There is no standard operating system or interface for smart TVs, almost every smart TV manufacturer uses different software and a different graphical presentation. Some companies use different operating systems and interfaces depending on the model.

Most smart TVs support broadcast services such as Netflix, Hulu, Amazon Prime Video and Pandora. However, some packages offer only a handful of applications that rarely change, while other models offer multiple screens, ranging from MLB to Facebook and Stitcher.

With the rise of smart TVs, the number of dedicated streaming applications has also increased, with applications such as PlutoTV offering live news, streaming shows and movies for free.

Cheaper models from some manufacturers offer only the most popular applications, while more expensive packages offer a full range of services.

Although LG and Samsung still use proprietary operating systems, there are signs that the manufacturers may be moving to a few major platforms.

Android TV, continues to progress and the Fire TV, Amazon Edition packages are back for a second year, but Roku TV is the main leader. Both TCL and Sharp’s models have opted to integrate Roku’s user-friendly interface and access to thousands of streaming services.

On the other hand, Android TV has been endorsed by Sony and Hisense. The platform has many applications and, most importantly, support from Google, which tends to add more applications than others. Amazon has also started selling its Fire Edition TVs in partnership with Best Buy, with the Alexa intelligent operating system appearing on Toshiba and Insignia TVs.

Updating the software with new functionalities

In general, all major TV manufacturers regularly release updates to their smart TV software, adding new features, improving old ones and fixing bugs and security issues, just like any other operating system.

Some of these updates add new features, such as extended support for HDR formats, such as Dolby Vision, or simply refining the TV’s internal firmware (often downloaded automatically).

You can even find manufacturers updating the entire operating system – Sony has recently started to migrate all its Android TVs to the new Oreo 8.0 version of the software, which offers significant improvements over the previous version.

But it also depends on a number of other factors. Smaller TV brands and older models may not be as quick to release updates as larger companies such as LG, Samsung, and Sony.

TCL is doing quite well in its partnership with Roku, but many other low-cost brands will be slower to release updates or add new applications,

Most TV manufacturers add and customize applications themselves. Some TV companies are faster than others at fixing occasional bugs or working with developers to improve applications.

TVs powered by these platforms, including Roku and Android TVs, have the distinct advantage of receiving regular updates and additional channels/apps.

And don’t worry about being left behind, if one company adds a popular service, such as Netflix, the rest of the manufacturers follow suit. 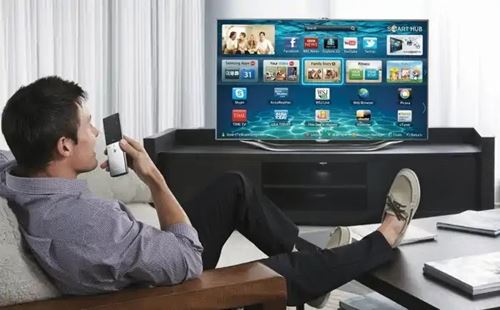 Voice search now allows you to search for content from live TV and streaming services and adds search for everything from weather and stock quotes to the latest celebrity gossip.

Voice integration lets you access other services from your couch, allowing you to order a pizza or call an Uber from the comfort of your own home. And if you don’t like the TV’s built-in voice assistant, you can usually pair it with the smart speaker of your choice.

These new features also allow you to control smart home appliances such as connected lights and thermostats, view streams from your Nest camera or Ring doorbell, or control your vacuum cleaner.

As voice assistants continue to evolve, you can expect to see the same improvements as for today’s smart TVs via software and firmware updates.

As these TVs tend to have stronger processors than conventional TVs, as well as online connections, manufacturers may add other features, such as casual gaming, which are now quite common on smart TVs.

Games are not nearly as sophisticated or as compelling as those available on a PlayStation or Xbox console, but they can be addictive.

So spend some time at the store browsing through the smart bundle offers to make sure you and your family are comfortable with it and read our detailed comparison of the major smart TV platforms to help you make a decision.

The FBI warns that the smart TV is spying on you