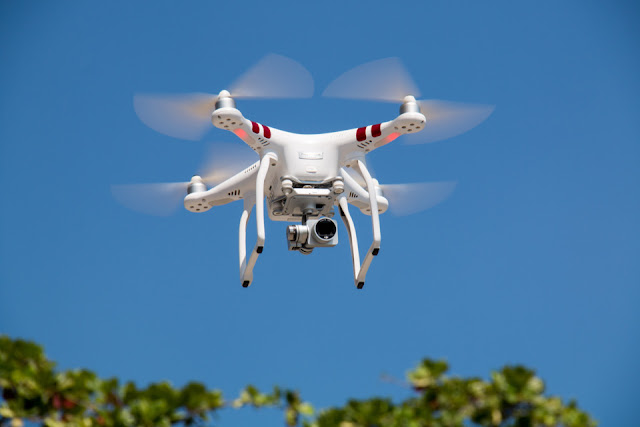 According to an Amazon patent, the in-house drones should not only deliver packages in the future but also be used for surveillance. Amazon customers should be able to book appropriate services.

For many years Amazon has been working on carrying packages with drones. If the aircraft does not ship packages, they should perform surveillance operations, according to a new Amazon patent. The patent indicates that the company wants to market “unmanned aerial vehicle surveillance as a service”. Customers could choose to fly over their locations every week, every day or every hour, the newspaper The Independent writes.
The US Patent Office has approved the underlying patent on June 18. Any concerns about privacy are met by the patent with the promise to monitor only previously authorized areas. According to the British Daily Mail, both property owners and nearby residents must agree to surveillance.
Recently, Amazon has presented a new model of its autonomous delivery docks. The drone is said to be about the size of a human and “able to detect static and moving objects,” said Jeff Wilke, Worldwide Consumer CEO at Amazon. The company uses real-time image recognition developed specifically for the drone. This could also be used for surveillance purposes. Alternatively, the images could also be evaluated in the cloud or by humans. Suspicious is then the system as a warning by phone, send e-mail or SMS to the user, a security service, the police or the fire department.
In addition to the camera according to the patent further sensors are used, for example, a chemical sensor to be used for the detection of fires, noise sensors, and thermal imaging cameras.

What is Shopify, The Other Ecommerce Store Giant… The Other Side Of The Amazon?