Surface Neo and Surface Duo are Microsoft’s upcoming dual-screen devices. The duo is an Android smartphone including Google Play services. The Neo is slightly larger and uses a specially adapted Windows OS called Windows 10X and an Intel CPU.

Long media have a Surface device with two screens speculated. Microsoft opened the curtain and introduced two new dual-screen concepts: the Surface Neo and the Surface Duo. The Neo has two 9-inch screens and uses Windows 10X, a specially adapted version of the operating system, which was designed for the use of two displays. The Surface Duo was also briefly shown. This is an Android phone with two screens, which will be released in the winter of 2020, however. Therefore, Microsoft keeps with details back.

Much more has been learned about the Surface Neo: It uses an Intel Chip of Generation Lakefield. This is a combo design of core and atom cores and LPDDR4 memory in one package. Intel has already presented the chip at the CES 2019. It fits into a housing, the halves are each 5.6 mm thick. There is also a USB type C port. The entire device should weigh 650 grams, according to Microsoft. 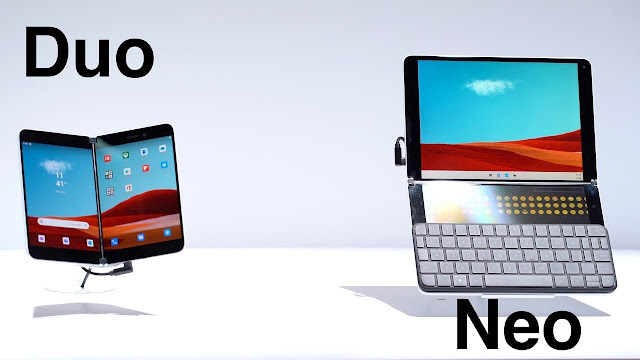 The two 9-inch LC panels have a touch screen and pen digitizer. The Surface Neo also uses the Surface Slim Pen, which was shown in the context of the Surface Pro X. It charges inductively on the device and is magnetically held on it. The two halves are not connected as in the Samsung Galaxy Fold but have a visible demarcation. But they are made of Gorilla Glass, which is far less sensitive. This also applies to the back of the device. The hinge can be folded 360 degrees.

Whether Windows 10X is its operating system or only a partial mode of Windows 10, was not said. Since the Surface Neo uses an x86 chip, at least all applications should be compatible. Windows 10X, however, behaves a little differently. So there is a magnetic mini-keyboard that can be stapled to the bottom screen. The software recognizes them and switches the screen to touchpad mode. Also, some Windows applications, such as Office 365, support a two-screen view that displays a variety of information. 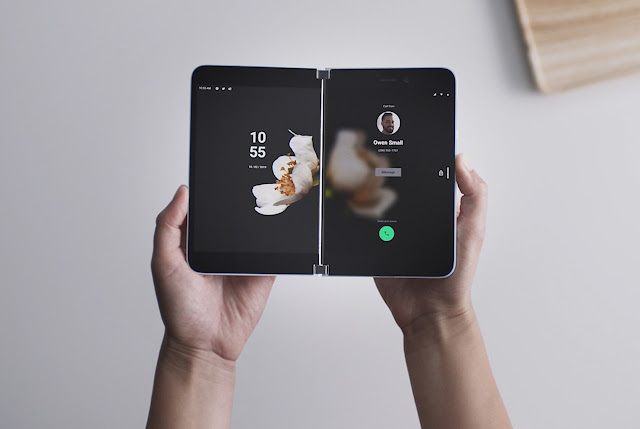 Microsoft wants to sell its Surface Neo from 2020 onwards. An exact date for the concept of the manufacturer did not yet