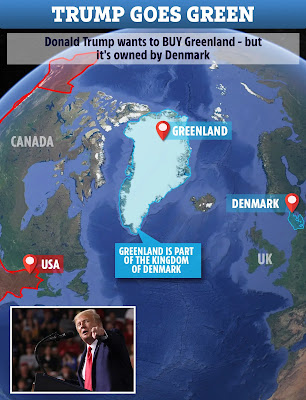 The Greenland government responded to news that said US President Donald Trump was interested in buying the island which is still part of Denmark. Greenland’s foreign minister, Ane Lone Bagger said, the area was open for business cooperation, but not for sale.

“We are open for business, but we are not for sale,” Lone Bagger said. Trump is rumored to be visiting Copenhagen in September and the Arctic is included in the agenda during the president’s meeting with the Danish and Greenland prime ministers.

Reported earlier, Trump wanted the US to buy the Greenland region from Denmark and had consulted with his advisers on the possibility of the purchase. “Trump has expressed interest in the independent and largely ice-covered Danish region and asked his advisers if it was possible for the US to acquire the territory,” wrote The Wall Street Journal.

“The president is called curious about the natural resources and geopolitical relevance of the region,” the report continued. The discussion about the purchase of Greenland was first reported by The Wall Street Journal, which cites two sources who know the situation. The idea has been laughed at and considered a joke by several Trump advisers, but several other parties in the White House took it seriously.

While Danish politicians revile the idea and consider it a joke.

“It must have been an April Fool’s joke that was not in time,” former Danish prime minister Lars Lokke Rasmussen said on Twitter.

While the Danish People’s Party Party added, it was evidence of the madness of the 73-year-old president.

“If he really thinks about this, then this is the final proof, that he has gone crazy,” Danish People’s Party foreign affairs spokesman Soren Espersen told DR radio.

“The idea of ​​Denmark selling 50,000 citizens (in Greenland) to the United States is absolutely ridiculous,” he added. Greenland, an island region between the North Atlantic and the Arctic Ocean, has its own government but is still part of Denmark and joins the country’s economic support.

The Danish government occupied the island area of ​​2 million square kilometers in the 18th century and is now home to nearly 57,000 residents, most of whom are still attached to the Inuit adar community. The island runs its own domestic affairs, but for defense and foreign policy, matters follow Copenhagen. Greenland received attention from some large countries including China, Russia, and the United States because of its strategic location and rich in mineral resources. In 1917 Denmark sold the islands of the West Indies to the United States. It was valued at 25 million US dollars and was later named Washington with the Virgin Islands.

MacBook Pro Laptops are Prohibited from Entering The Aircraft