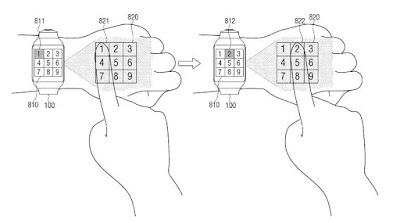 If your smartwatch’s teeny tiny face makes it tough to navigate the device, a futuristic tool reportedly in the works could put more control into your hands. A new Samsung patent filing shows a projector integrated into the smartwatch that expands the interactive area you can use to control your watch onto your body.

Specifically, the technology would project interfaces such as a dialpad, keyboard or menu options onto the back of your hand or forearm, and you can touch those areas to input numbers, words or selections. Based on drawings accompanying the patent, the watch may even be able to project onto surfaces such as walls or doors to enlarge the virtual user interface.

The patent states that the wearable device would include an omnidirectional camera to detect a target area to use as a canvas along with an image projector. Samsung also indicated in the filing that this technology could also be used for head mounted displays, such as virtual reality headsets, to let the wearer display what they’re seeing on an object in their surroundings.

The projector would display “the virtual UI screen that is formed by reconfiguring the UI screen of the HMD device to correspond to a shape of at least one of the preset space,” according to patent filing.

I’m more fascinated by the applications this tech could have for smartwatches if it ever comes to market. The idea of having more room to work with on a dainty wearable is appealing, but I hope that squeezing a projector into a smartwatch doesn’t result in a chunky frame. Already, many smartwatches are too large for my small wrists.

Samsung will also have to make sure the watch has enough battery life to support the projector at least all day, considering most smartwatches today last at least two days before needing a recharge.